The Perils of Federalism: Race, Poverty, and the Politics of Crime Control 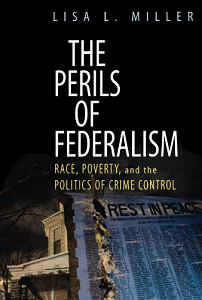 Much of the existing research on race and crime focuses on the manipulation of crime by political elites or the racially biased nature of crime policy. In contrast, Lisa L. Miller here specifically focuses on political and socio-legal institutions and actors that drive these developments and their relationship to the politics of race and poverty; in particular, the degree to which citizens at most risk of victimization--primarily racial minorities and the poor--play a role in the development of political responses to crime and violence.

Miller begins her study by providing a detailed analysis of the narrow and often parochial nature of national and state crime politics, drawing a sharp contrast to the active and intense local political mobilization on crime by racial minorities and the urban poor. In doing so, The Perils of Federalism illustrates the ways in which the structure of U.S. federalism has contributed to the absence of black and poor victims of violence from national policy responses to crime and how highly organized but narrowly focused interest groups, such as the National Rifle Association, have a disproportionate influence in crime politics. Moreover, it illustrates how the absence of these groups from the policy process at other levels promotes policy frames that are highly skewed in favor of police, prosecutors, and narrow citizen interests, whose policy preferences often converge on increasing punishments for offenders.

Ultimately, The Perils of Federalism challenges the conventional wisdom about the advantages of federalization and explains the key disadvantages that local communities face in trying to change policy.